This is a living document and is therefore subject to change at the whims of the participants.

The goal of this NETWORK is to amplify GROUPS that are participating in PROJECTS working towards COLLECTIVE LIBERATION through MUTUAL AID.

We want to provide a space, both digital and physical, in which local and regional radical leftists can network together, learning and sharing the skills necessary to bring about the world we want to see. We aim to build a resilient but gentle community that can withstand the many intersectional crises facing us today. We have NO leaders and are organized horizontally, not hierarchically.

Each group will be it’s own independent entity capable of AUTONOMOUS DIRECT ACTION. Some groups will have different STRUCTURES and methods of DECISION-MAKING. Some more informal groups may have no structure, each person individually contributing how and when they can. Some groups may have multiple projects, some projects may not need any formal group to succeed, requiring instead simple SELF-DETERMINATION on the part of those contributing their labor. Some groups will be accountable to and accessible by the PUBLIC, others will be more PRIVATE to the individuals in the group.

This network will be ran by those PARTICIPATING in it, with decisions being made in conversation between all participants. The hope is to remain RESILIENT by encouraging a DIVERSITY OF TACTICS, while showing true SOLIDARITY between network MEMBERS.

We use the term “Bloc” to refer to the various groups of individuals that have formed around specific causes, interests, or projects. This borrows and builds upon the use of the term black bloc in protest scenarios, being a group of individuals acting in concert to achieve a desired result. We break our network into these smaller groups so things are less unwieldy and overwhelming than having everything being done in one space. These smaller affinity groups can establish their own cultures, organize their own actions, and effectively make decisions that only affect said group, only coming to the larger network when outside assistance or consensus is required.

The participants of this network agree to work to keep our spaces and projects ANTI-RACIST, ANTI-SEXIST, ANTI-HOMOPHOBIC, ANTI-TRANSPHOBIC, ANTI-ABLEIST, ANTI-COLONIALIST, ANTI-IMPERIALIST, ANTI-CAPITALIST, and ANTI-FASCIST.

We also commit to uphold the values put forth in this document such as COLLECTIVE LIBERATION, SOLIDARITY, SELF-DETERMINATION, MUTUAL AID, and AUTONOMOUS DIRECT ACTION.

The participants of this network have agreed to adhere to these structural and organizational principles as much as it relates to our work: 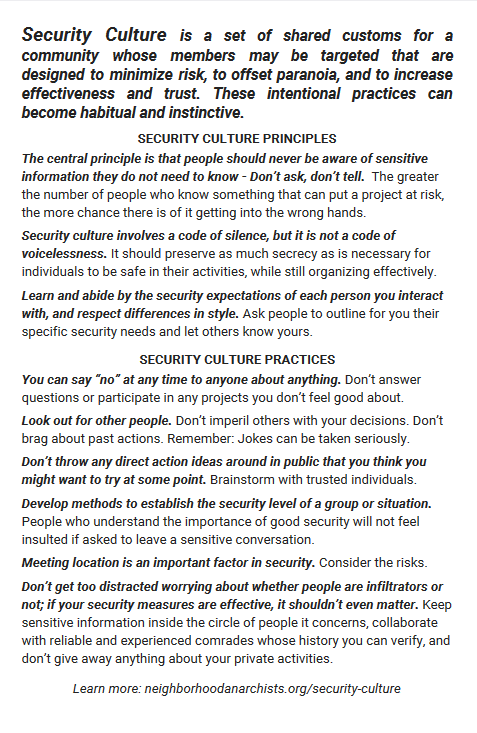 Network: A collection of distinct groups working in coordination with each other to share labor and resources when appropriate.

Group: A collection of individuals joined together in common pursuit of a shared goal or project. Can be on-going or temporary.

Collective Liberation: In the words of Fannie Lou Hamer, “Nobody’s free until everybody’s free”. All struggles are intimately connected and movements must work together and share knowledge, power, and resources in order to bring about a more peaceful, just, and sustainable world free of any kind of unjust oppression of others or the earth.

Mutual Aid: Voluntary, reciprocal, participatory assistance among equals and being with, not for, disaster survivors. The natural state of humans is not competition but cooperation.

Project: A direct action campaign aimed at achieving a specific goal, undertaken by an individual or group.

Direct Action: Prefiguring the world as you want to see it and acting directly to bring about that world by solving problems collectively through bottom-up organizing instead of appealing to our rulers or leaders for reform.

Structures: The organizational structure of a group of people. Informal or formal, non-hierarchical and horizontal approaches are encouraged for maximum participation.

Decision-Making: The method by which a group reaches and moves forward with decisions. Popular examples include but are in NO WAY limited to: various consensus-based models, different methods of voting, conversational models, consent, spokes-councils, assemblies, etc.

Self-determination: The ability we ALL have to decide for ourselves what future we want to see and what course of action to take based on our lived experiences and worldview. Can apply to individuals or groups. No one will be able to coerce another to do anything, including this network. We are not in charge, we are in conversation. Disagreement between groups or individuals shouldn’t stop people from pursuing the actions they find to be correct. As long as we have shared values and common cause we should practice solidarity and leave the policing to the police.

Public: The population of people that are in need of mutual aid but are not a part of organizing or volunteering for either the network, or any individual group.

Private: Things shared in confidence between members of a group or the wider network should remain private. With many channels and pseudonyms floating around it may be difficult at times to discern what you can tell who. No screenshots of encrypted chats or any personal information of any kind should ever be shared outside the channels in which it originates. No discussions of internal group organizing with people not in the group without permission. The level of privacy can be best determined by each group. When in doubt dont share and ask the group.

Participating: There are many ways in which to participate in this network and these groups. But these projects all require direct participation in SOME way, so for security reasons – no lurking allowed. It is recommended that any inactive users are purged periodically. MOST of these spaces are not for watching, either participate or leave. You cannot expect to make decisions for a group you are not contributing to in any material way. For example, you can only “join” this network by participating in it, there are no dues or membership roles – your labor is your membership.

Resilient: The ability to face, weather, and recover from state repression, individual sickness, hardships, or losses. We do not want to make it easy to stop us by relying on a centralized authority or a static set of tactics. We should remain open, flexible, and adaptive.

Diversity of Tactics: The recognition that in the struggle for liberation there is no rule book, and there are as many theories on how to do it as there are people working towards it. We will likely need all of them to succeed. The idea is not to try to select the “right” way of acting but to accept that, as long as we have a shared vision for the future, having different methods of acting to achieve it is not just ok its desirable. If you do not want to engage in an action…then dont, but dont attempt to force others to stop what they see as the right course of action. Diversity strengthens our movement.

Solidarity: To be used as a verb, not a noun. The awareness of shared interests, objectives, standards, and sympathies creating a sense of unity of groups or classes with which we struggle alongside of and not in salvation of. One should seek to act as though we are in the same fight together and not merely in passive support of a certain struggle.

Members: The constituent groups of this network as agreed to by the involved parties.

Organizing Principles: An agreed upon set of principles that determine the structures, decision-making processes, directions, and methods of acting for the group or network.

Shared Values: A set of values shared by a group or network allowing the various participants the initial common ground necessary for effective decision making. We cant expect to come to consensus with people who are opposed to our work,nor should we try. We are not tolerant to the point of intolerance, and there will be some people we cannot work with because of directly opposing ideologies. i.e. fascists, white supremacists, racist, sexists, misogynists, abusers, homophobes, transphobes, etc.