This article is not intended to cover a deep history of the Temporary Alternative Shelter Location (TASL). That has been covered extensively by The Daily World here, and here. What I hope to cover here are the conditions of the camp (since its not a shelter) leading up the recent fire that occurred there. I aim to show how desperate the need for heating was this winter, and how the abhorrent neglect the city has demonstrated has left the people living at TASL exposed to inclement weather as well as dangerous conditions culminating in, and exemplified by, the fire.

In March of 2020 the City decided to close TASL and the COVID-19 eviction moratorium prevented them from immediately throwing all those people back onto the streets. They did not do this out of a concern for their well-being but at the threat of a lawsuit from the attorney general. 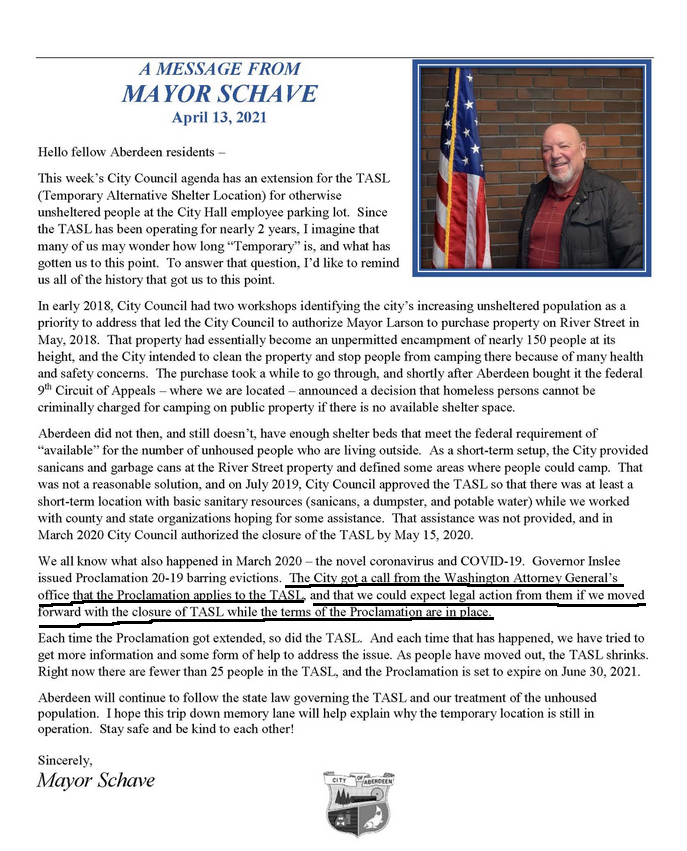 Since then they have been setting policies and doing whatever they can to kick people out and reduce the population living there as much as possible. They have also stopped accepting applications to get a tent there, so whoever was there at that time is all they’re letting in. This is a clear move to effectively close the shelter while not facing any legal consequences.

They are also prohibited from evicting people from TASL because they are incapable of providing alternative shelters. So you can see that the same people pushing to close TASL are also working against that end by pushing to hold up the shelter. They don’t want a camp cause its not a shelter, they dont want a shelter cause its not housing, they dont want housing cause of the money. What do they want?

It is necessary to say that the TASL was only meant to be temporary with an original timeline of 30 days. We can see below from the Daily World at the time that the City intended to set up a long term location to camp at, they even bought the very property that people had set up at by the river. None of this has happened.

Since the inception of this project the City of Aberdeen has neglected the camp. Despite showing up at $100 per month in the TASL budget, they have not offered laundry service for anything beyond the first few weeks. There has never been a safe and adequate way for residents to heat themselves. Still, if you ignore the $18,600 per month (which we absolutely will not be ignoring) to police the small camp, its a quite reasonable monthly expense for the City. Unfortunately, the promises made to the people they tore out of the riverside community they had built up organically were never kept. This is not at all shocking as we know by now that the state doesn’t function to take care of people, it serves the rich at the expense of the poor.

This poor management, neglect, and lack of services led to a few health and safety issues at the camp in the months preceding the fire. After almost two years of being exposed to the elements every tent frame has broken, and although the canvases are largely fine this leaves the occupant of the tent responsible for figuring out some temporary solution to the problem. Many tents do leak, requiring tarps to be used over the tents. The tents, when working perfectly fine, were never meant for long term habitation and are constantly having to be vented because of all the condensation. This condensation, plus the extremely wet weather we have here, has lead to black mold forming on the pallets below the sleeping area of the tents. The worst tent was completely cleaned and bedding changed out by the community there but to replace and clean the entire camp is beyond what they are capable of.

Speaking of wet weather, we cannot talk about the experiences of those living outside without discussing winter. This winter in particular was especially brutal, the weather was cold, and COVID-19 added additional hardships and limitations for the resident of TASL. The winters we get out here may not be the Siberian Tundra but temperatures regularly reach literally life-threatening levels. People living at TASL have not been allowed to have any safe and reliable way to heat themselves. This makes TASL one of the most dangerous places an unhoused person can live, elsewhere they might at least be able to warm themselves and avoid fascist harassment. So, faced with the proposition offered by the City of just freezing to death, people resisted by surviving and using what resources they had to provide each other heat throughout the winter. Without proper infrastructure in place less safe methods of heating were employed in order to not die. Even so, at least one resident suffered from frostbite this winter.

***To be very clear, the cause of the fire is still unknown. As of the publishing of this article no results have been offered from the investigation conducted by the fire department. This author does not assume that the residents or their methods of survival contributed to the fire in any way. That said, the right wing response has been largely reactionary and to heap all blame on those with very little power in the arrangement between them and the City. So this article will address those rumors while trying to remember that no cause has yet been determined.***

So, from the ground up, we have moldy pallets, broken tent frames, leaking tents, dangerous living and heating conditions, deadly cold temperatures, on top of months of poor planning, management, a lack of services, and neglect by the City. This is the situation going into April when just before 7AM on Thursday April 1st, a fire broke out at TASL from an unknown cause.

Thankfully, the fire only destroyed one tent, but the resident inside lost everything he had, including his saxophone, which was how we made money. The hate came hard and fast with many in the comments on social media saying such horrible things that the local police scanner Facebook page had to put a warning to be respectful or be banned on their thread. A sight not seen on any of their other fire notifications of local structure fires.

People immediately jumped to blaming the residents for the fire, wishing harm on them, and actively cheering the fire. Unsurprisingly, local hate group SOAP, was in top form in their comments section as well. The fascists loved seeing the tents on fire, perhaps hoping that the solution to their problems had been come at last. Too scared behind their keyboard to set the fire themselves (probably), they took great pleasure at watching what had likely played out many times in their heads occur in real life. 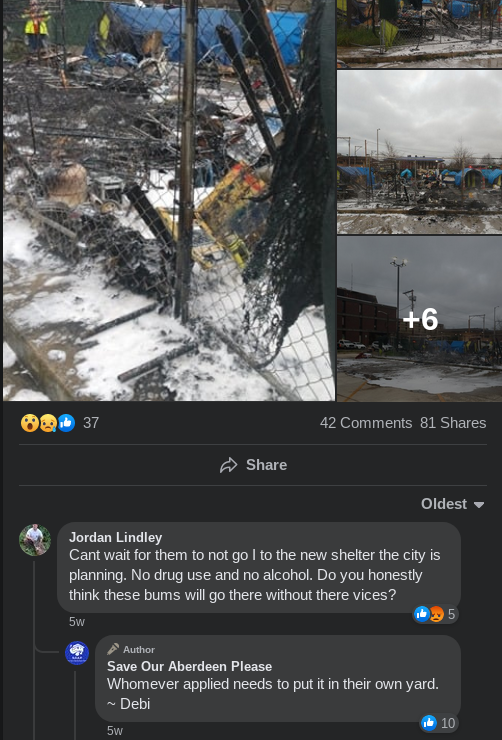 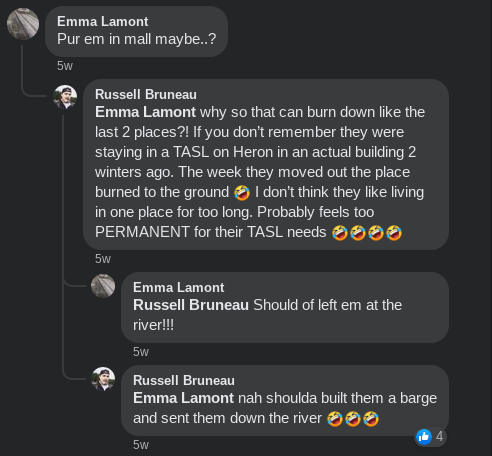 Many of this ilk started placing the blame on the heating methods employed by the residents of the camp. Whether propane tanks, or various extension cords, they took to social media to spread false rumors. None of them seemed to question why the resident of TASL were using such undesirable methods of heating as they were. Because if they had they would realize that people cannot be forced to freeze to death by their government (these are small govt people right??). People have the right to exist and to take action to survive. When the City didn’t provide a safe and adequate way of heating the residents of the camp throughout winter they set up the conditions for this fire, and consider how much deadlier it could have ultimately been. 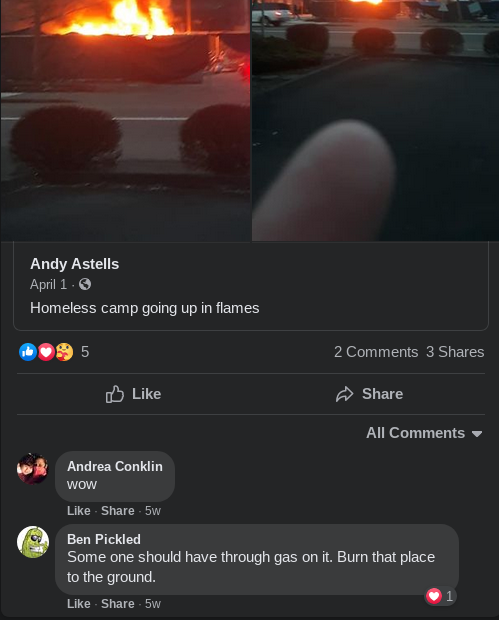 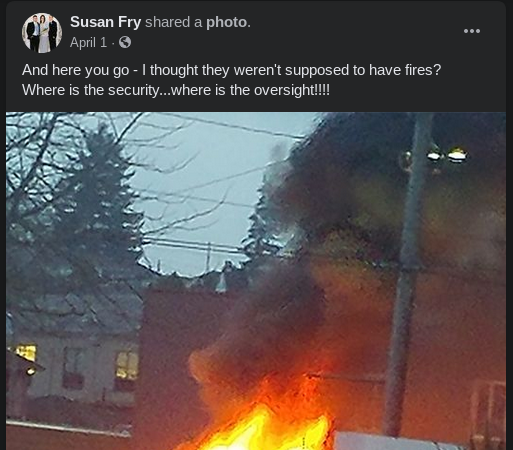 Following the fire the city moved in with cleaning crews and further traumatized the residents by throwing away many people’s belongings, evicting one resident, and removing the tents from a few of the residents. The person who lost their belongings to the fire was so traumatized they decided on their own volition to leave the camp. The City did actually replace the one single tent that was damaged. Chehalis River Mutual Aid Network mobilized a campaign to pressure the City to replace every tent and the platforms beneath them to no avail.

Let’s take a closer look at that TASL budget now. As we do try to see if there is any one expense that jumps out at you. Maybe there is one expense that is just a tad larger than the others? One that ostensibly is meant to provide “security” to those residing at TASL? Euphemisms aside, the City has been spending a full 90% of the monthly TASL budget simply to police the residents inside. But what security has been provided? Do you think those living there feel secure? When they can’t safely heat themselves, or even cook a hot meal? When they have members of hate groups roaming freely through the camp snapping photos for a campaign of dehumanization? What else would one expect a security guard to do at a tent city other than keep people intent on doing harm to the residents out? Maybe we should ask “whose security?”.

We see here a call back to the running theme of 2020: a falling of the scales from our eyes. An awakening to the fact that those marketed as providing safety and security are actually there for protection of private property and the comfort of the rich. Why is the City paying so much money to staff the security shed while allowing the residents to live in dangerous conditions that ultimately resulted in a fire? So many questions that will never get an answer, because no one is accountable. Can you imagine a public official genuinely answering your question? Hopefully we know by now that we are all we’ve got, and luckily we are all we need. We don’t need police, or politicians anymore. One hopes that they can find a way to fit into the new society we are creating without causing too much harm along the way, but history doesn’t inspire much confidence.

We Keep Us Safe, CRMAN