On the back of our most recent successful petition we put this together in conjunction with the local homeless community to demand that the City of Aberdeen meet and talk potential TASL alternatives with those living on the streets.

If you’ve ever shared anything we’ve done or if we have done anything to inspire you towards action then we need you now more than ever.

Please sign and follow us over the next few days to learn more about how you can get involved DIRECTLY in support of this community. TASL closes this Friday the 16th at noon…

TL;DR – Scroll to the bottom for the lazy/busy version stock letter to send or email to ALL THREE COMMISSIONERS (esp Warne) and contact info for all three. Now get back to work and read this later.

We desperately need your help contacting our local officials today. GHC commissioners met today and almost moved to deny grant funding to a much needed shelter based on both social media outrage trolls and inaccurate/incomplete information. We were present for the virtual meeting of the Grays Harbor County Commissioners bi-monthly meeting on the first and third Tuesday of the month (an event hopefully present on your own calendar now). On the agenda was the grant funding for the shelter proposed by Chaplains on the Harbor. Listed as “Chaplain’s on the Harbor Emergency Shelter Contract for 35-40 beds – $1,080,000 (grant)”, this money comes from the CARES act funding for Emergency Solutions Grants, NOT the county. 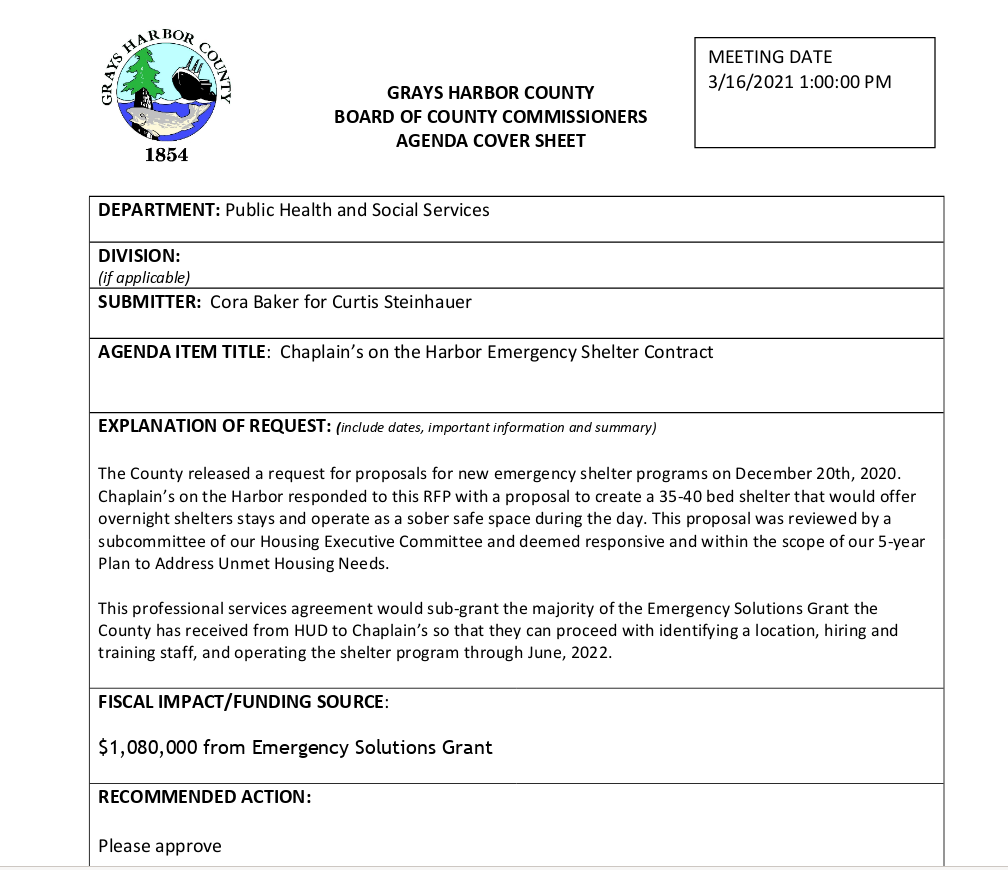 The two recently elected right wing commissioners seemed opposed to the funding, despite one of them seeming quite confused about a couple aspects of the project. Kevin Pine of District 2, whose brother participated in the white riot that occurred January 6th AND coincidentally convinced little Kev to run for office.

The other being Jill Warne of District 1, seen here joking about not knowing how to execute a job that literally determines the life and death of people in this county.

Now, since both these people have made their careers as politicians thus far on – not being politicians, some degree of incompetence is to be expected. But a few of the things mentioned by Kevin in particular were a little hard to believe, so let’s dig in.

First, he tried some casual fear mongering about how the big scary emergency shelter would be in the heart of downtown Aberdeen, a place known to be reserved strictly for the wealthy. This was pushed back on by many in attendance, including commissioner Vickie Raines of District 3. But you don’t have to look any further than the cover document (most likely provided to the commissioners beforehand) to see that the project has yet to move into the phase of selecting a location.

Next he turned to the big boogeyman in the room, the shelter being a LOW BARRIER SHELTER! Queue the scary music. Kevin, as well as members of the hate group SOAP (Save ‘Our’ Aberdeen Please) profiled in our last post, seemed almost deliberately confused on not only what a low barrier shelter WAS but on the fact that the shelter is not described as being “low barrier”. People seemed to think that a low barrier shelter meant that there were no rules or perhaps even laws to keep people safe. Or that people would be allowed to take drugs and do otherwise illegal things without consequence while staying at the shelter. A murky vision of a sin-fueled drug dens swam before our eyes as Kevin described the emergency shelter to be operated by a church, referred to in the same cover letter as above, a “sober safe space”.

Low barrier means that people aren’t denied service because they are mentally ill or addicted to drugs. These programs are designed for that very purpose, in fact to remove that aspect would make any proposal ineligible as per the requirements of the county. You read that right, the county’s own request for proposal REQUIRES any project granted these funds (specifically designated for emergency shelters) to be a low barrier shelter, which was the reason given for the county commissioners to deny it. That’s the banal cruelty of our system for you. 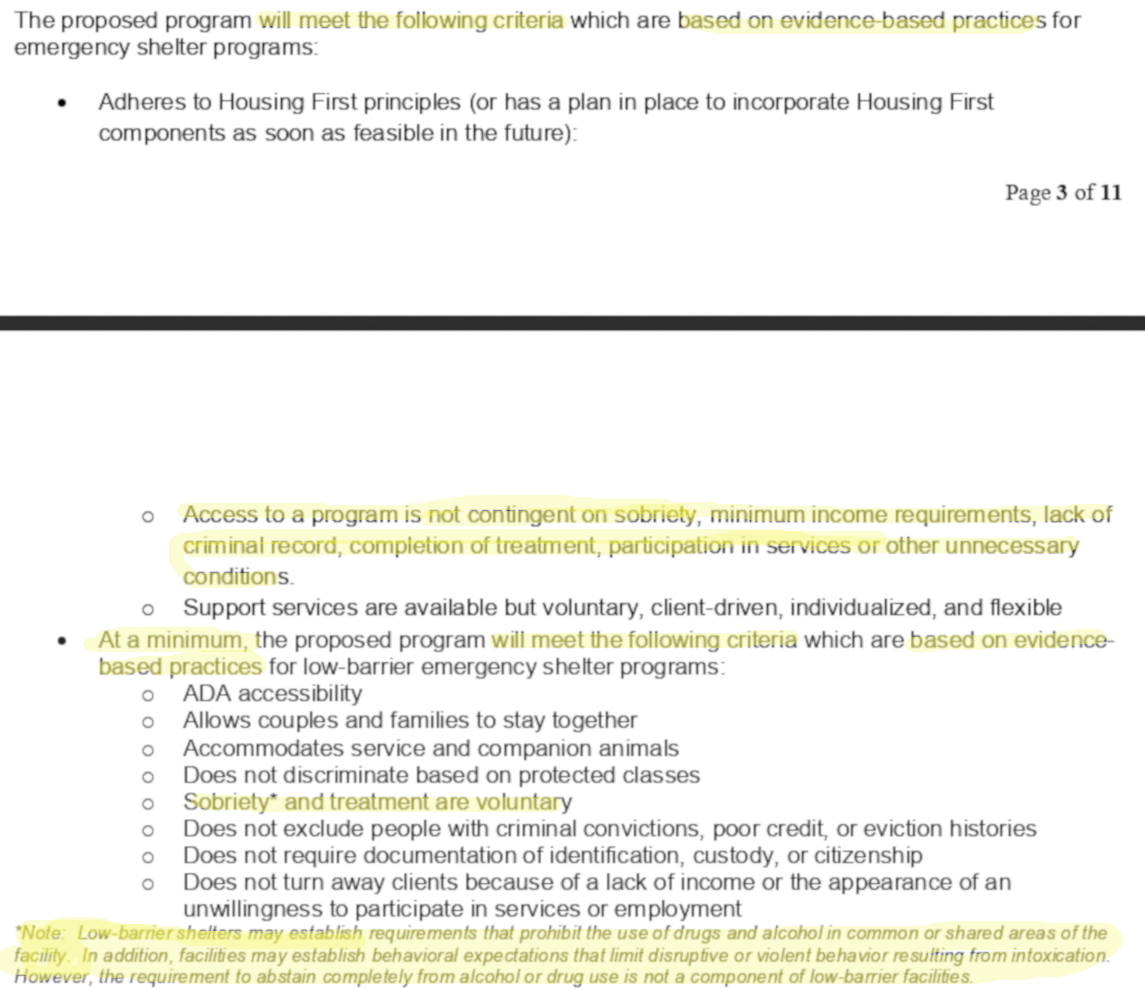 We can also see from this Request for Proposal (RFP) document from the county that the concept of a low barrier model is based solidly on evidence-based practices. So basically, the people who don’t know what they are talking about don’t think it’s a good idea while the people who DO know what they’re talking about think its a great idea. One side has hear-say, the other has science. As if these were two equal opponents using logic and reason to debate an issue in good faith.

The note at the bottom seems almost hand written with this opposition in mind. “*Note: Low-barrier shelters may establish requirements that prohibit the use of drugs and alcohol in common or shared areas of the facility. In addition, facilities may establish behavioral expectations that limit disruptive or violent behavior resulting from intoxication. However, the requirement to abstain completely from alcohol or drug use is not a component of low-barrier facilities.” So on top of, you know, all the laws this shelter could obviously make and enforce rules to keep people safe, thats kind of the whole point here. The simple fact is that these people don’t care about the taxes as it’s not coming from their taxes. They don’t care about the safety of the residents or staff, as rules will ensure both. They don’t care about drugs, as alcohol is never mentioned in their fear mongering, even though it is the most likely substance to be abused and lead to violence. They don’t even care about those experiencing homelessness, or they might have used this RFP as an opportunity to propose their own facility, although they would have to operate within the county guidelines as a low-barrier shelter. They still could have proposed their own solution, with all the rules it could legally handle. Just think, it could have helped so few.

Another issue that was confused at the meeting was the ever present issue of funding. The money for this shelter is not coming from the county, it is coming from the Washington State Dept of Commerce, and is specifically dedicated for use for “street outreach, emergency shelter, rental assistance, and related services”. They would presumably deny this crucial shelter to ALL because of their fear someone who “doesn’t deserve it” would get a cot for the night. Everyone deserves the right to live. This money cant be used for anything else…what is wrong with these people? Not to mention the allocation chart of the county’s total CARES Act funding shows a clear bias I wonder if you can spot. I’ll give you a hint, it’s going mostly to the same people now filling Kevin’s ears that the poor people are hurting their business or costing them money, as they sit back in their homes and grab cash for NOT operating – and I can not stress this enough – THE BUSINESSES THEY OWN! I mean, where even is the slice for this sort of shelter funding, public health? 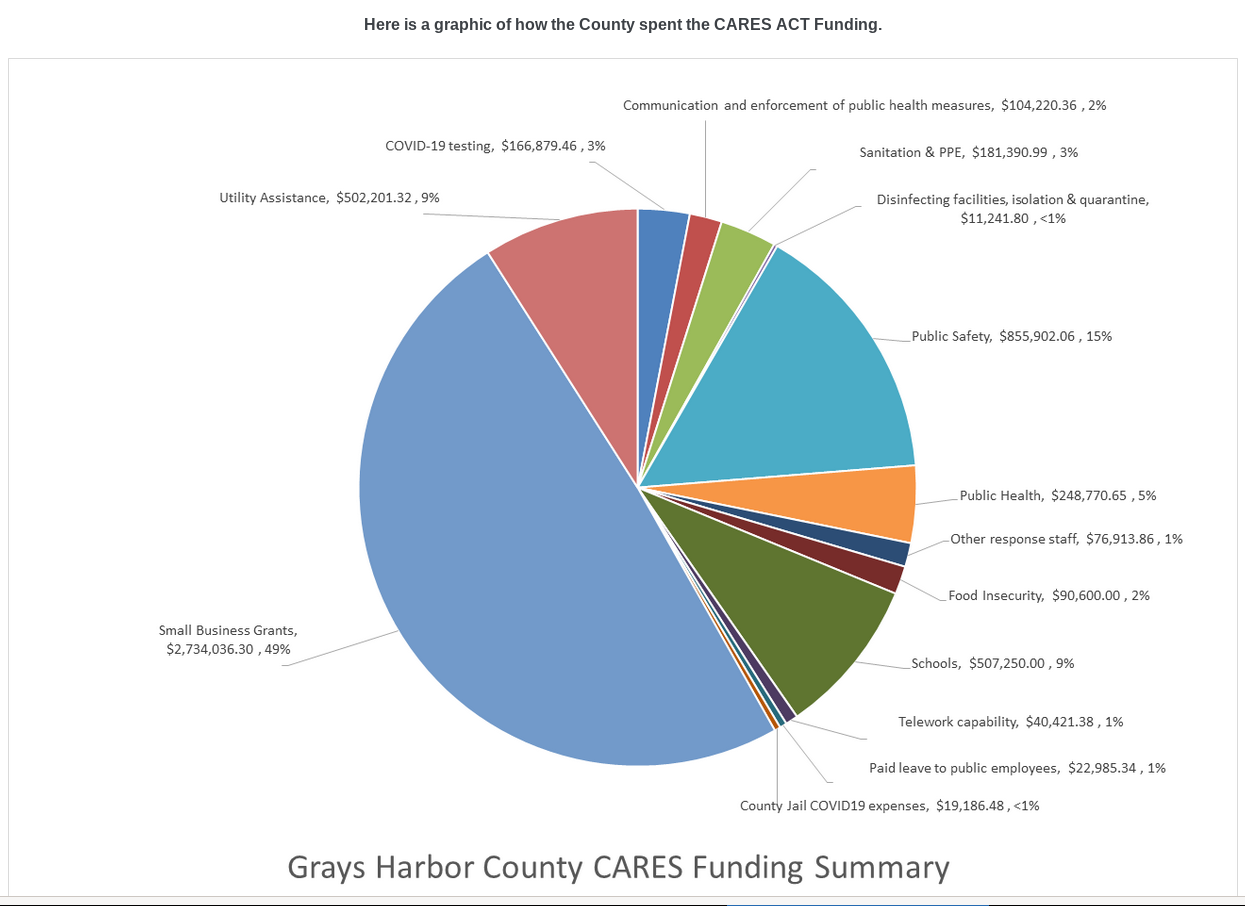 So you may now be pissed off and wondering aloud how do I contact these people and let them know what I think about all this. Well, to be honest, the best way would be to join a right wing hate group, but then you’d be in a real pickle. Another viable option would be to simply be well connected, perhaps a family friend. 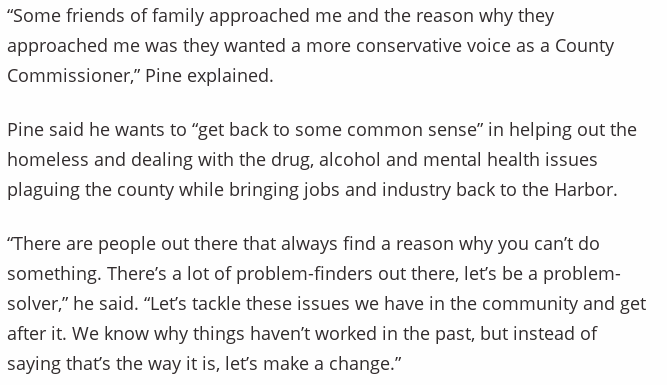 “What’s that?!” you say? You thought that it was his brother who convinced him to run? Well as you can hopefully tell by now nothing really adds up with ol’ Kevin. He says he’s conservative, and that he wants to help those suffering from a lack of housing and a lack of health care. But then he can deny not spending the county’s money, to a private entity, taking money from a special dedicated fund, for a homeless shelter, that will use jobs to employ a staff, while helping people get back to work and paying rents. He votes to dismiss, or moves to deny, or – ah hell! Who cares about knowing how to do this job anyway. Deny, not because of any science based reason, as the science clearly leans towards a low barrier model, but based on internet rumors and gossip. Inconsistency and hypocrisy at full throttle, Kevin looks poised to shoot to the top of the Republican ticket in years to come.

Anyway, fuck this rotten system that promotes needless suffering to satisfy the profit margins of a few. Below is the contact info for these jabronis, as well as various prompts/stock letters for people to use in their emails or letters. Please consider writing to these people, especially Jill Warne, she seemed to realize that she wasn’t fully informed on all the facts and wisely decided, as did the full commission eventually, to table the matter until more community outreach can be done. She may be more amenable to the arguments posed here than the clearly disingenuous and thoroughly disinformed Kevin. I personally don’t see a solution in turning to the government for assistance, these folks will always have more money, more connections, more back dealings, more masks for their hate, more reasons to deny our humanity. I want system change. But as a friend told me, “We must stay alive to get there”. Stay safe out there, and don’t forget this is all happening during a pandemic.

In Love and Rage, CRMAN

In an effort to increase the abysmal accessibility of the so-called public meetings we are going to be collecting comments and letters from our friends in the streets to pass along to the commissioners. The commissioners couldn’t be bothered to go ask them what they thought about this project, and its likely they have no idea its been proposed. If you asked them your responses might be skewed I guess. We will bring the public to them going forward.

We also are publishing these prompts to either get your creative juices flowing to construct your own personal letter, or to simply help make choosing the right words easier. Feel free to edit or add how you see fit. Commissioner contact info is at the bottom, please email each one individually. Get to know these three people, they unfortunately have an enormous amount of power over our lives.

Prompt 1 – for those currently or previously experiencing homelessness:

Prompt 2 – for those currently or previously experiencing homeness:

Grays Harbor County Commissioners Vicki Raines, Jill Warne, and Kevin Pine, My name is _________________ and I have been a resident of Grays Harbor for _____ years. I am writing today in support of Chaplains on the Harbor opening a shelter.

While I am currently in a house, I realize that it could perhaps be me out there, either in a different circumstance, or down the road a ways. I want to live in a place that would take care of me if I lost my house, and not turn its back on me in my highest moment of need.

I support Chaplains on the Harbor opening a shelter space in Grays Harbor because the people who work there have been where the people they intend to serve have been. They know what they go though. Also, they have been out on the street helping in every way they can for a long time. I know I can count on them because they have been there for the community.

Prompt 3 – for those currently or previously experiencing laziness or busyness:

Grays Harbor County Commissioners Vicki Raines, Jill Warne, and Kevin Pine, My name is _________________ and I have been a resident of Grays Harbor for _____ years. I am writing today in support of Chaplains on the Harbor opening a shelter.