Local outrage over garbage devolves into dehumanization of unhoused community

The latest round of reactionary outrage over the “garbage” that has steadily been accumulating in and around downtown Aberdeen began as a Facebook post by local business person Kellie Carlson Daniels. Mrs. Daniels had enough of the wrappers and shoes strewn about her city and decided to do something about it. She began snapping photos of pieces of garbage lying around town, this soon lead her to the unhoused community behind City Hall. Soon she had abandoned the garbage documentation escapade for bigger game, taking highly intrusive and exploitative photos of the private spaces where these folx live. Going so far as to enter the camp and take photos of peoples living quarters trying to document…garbage? 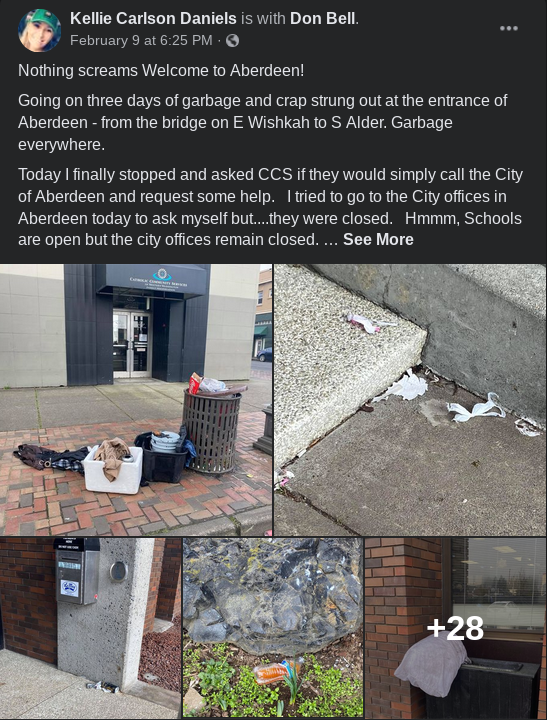 Once back in the comfort of her house these photos were posted to her account and the comments section opened up to a whole new interpretation of the term “garbage”. As conversations ensued, it became more and more clear that the garbage that most people truly seemed upset with were the human beings being subjected to a disgusting lack of shelter in our community. The familiar “garbage” talking point only provided so much cover, as people in a comment thread locked from public input let their thoughts be known. 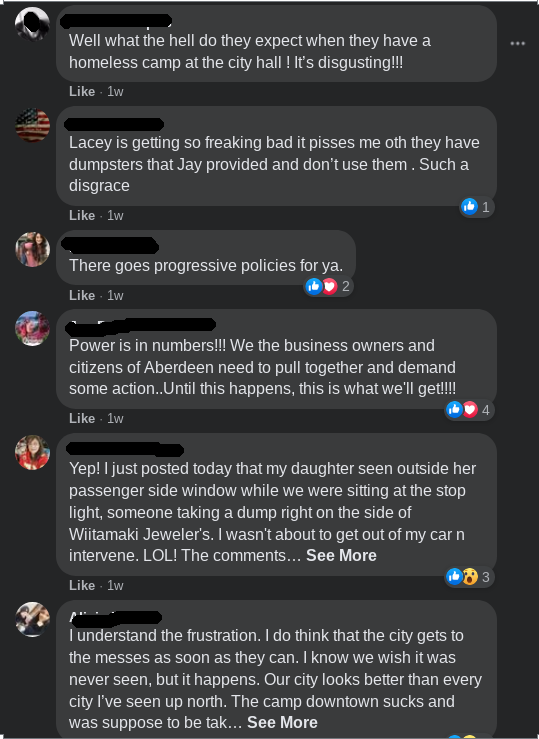 Our sisters, our brothers, our friends, ourselves; we could be in this very same position quicker than we think. In a time of increasing back rent debt due to COVID-19 and the number of people unstably employed and/or housed, this sort of callous lack of regard for the material conditions of our neighbors seems misguided at best, and sinister at worst. With all of the high stakes problems our community faces today, garbage has to be among the pettiest. Some people in the comment section were there to offer counter narrative to point out that it is not a “homeless” person problem but a litter problem. Or perhaps more broadly, a lack of affordable housing and health care problem. 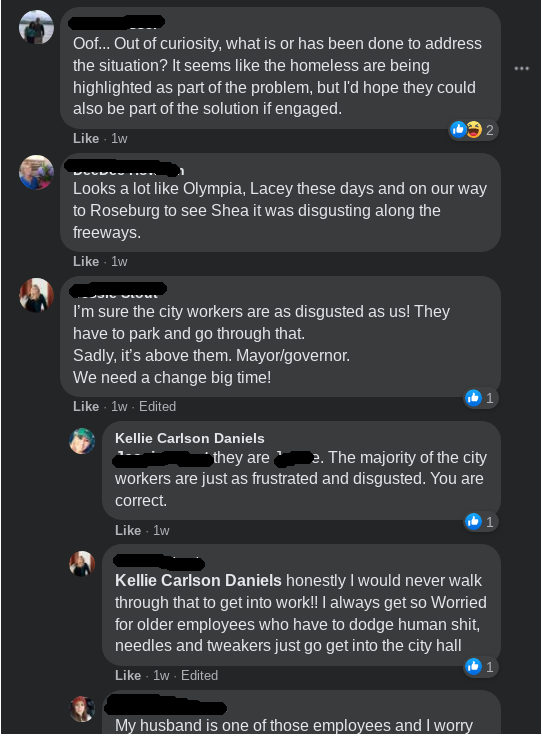 While some blamed city officials, past and present, others simply blamed the unhoused folks who have daily concerns about where to sleep and eat, not for operating their own garbage services. All this “social media chatter” especially from business leaders, led to the smallest of actions by elected officials. They hired two temporary workers to clean up the streets until another plan can be thought of. It also contributed to an article on The Daily World about the so-called “garbage problem”. This thread on Facebook soon turn just as toxic as the last; with a photo of peoples homes, not garbage, credit of Kellie Carlson Daniels. 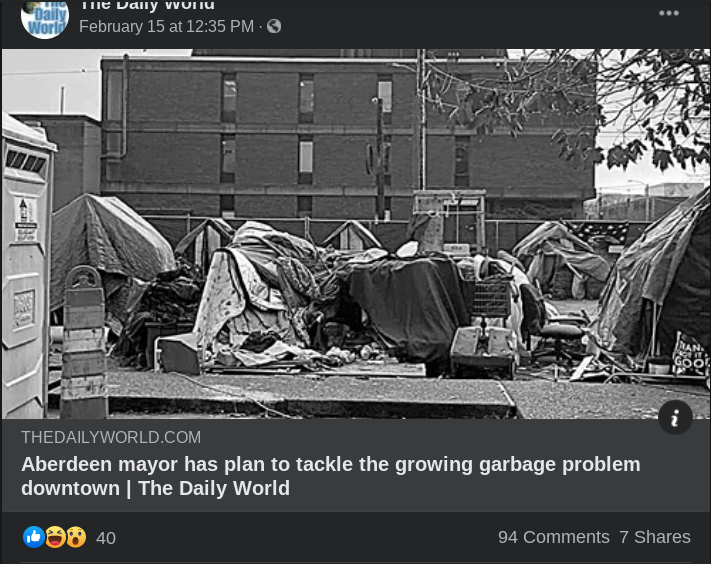 The previous mayor Erik Larson even commented to remind everybody that the current mayor had CUT the clean up program after taking office, only to reinstate it now. So, in short a right wing mayor was elected, he cut a program that helped clean the city streets of garbage, the people who voted for him didn’t appreciate the marked increase in garbage and complained to have him reinstate it. A fine example of electoral politics if ever there was one. What we need is not partisan politics, but mutual aid.

Reacting to the amount of money the city allocated for the temporary workers some suggested the unhoused folx clean up the streets of their city, or face some sort of banishment from the city. Perhaps not realizing that while the unhoused will clean up after themselves if given the proper resources, they are not responsible for cleaning up all of downtown as they are certainly not the only people littering. As evidenced by the cleaning done by them today after being provided dumpsters by the city and garbage bags by us at Chehalis River Mutual Aid Network. Most people tend to clean up after themselves, but it’s hard to DIY a dumpster or garbage truck.

UPDATE: After cleaning up one parking lot next to the cold weather shelter, multiple people were forced to move the vehicles they live in to another location. This tried and true tactic of harassing people into moving from place to place is less than a bandaid, causing more harm than good. It does absolutely nothing to address the underlying issues and causes undue hardship for people in already precarious and difficult situations.

The final form of this whole debacle was not calls for the obvious solutions of providing people with the tools and resources to take care of themselves and their community, but dehumanization.

Calls for MORE incarceration as an answer to being unhoused and good old “tough love”, when data actually shows that the best way to end honelessness is both to raise minimum wage and lower rents. Incarceration actually proves to be one of the most expensive options as shown below. Common refrains such as “they dont want help” and “they chose to live this life” fly in the face of the stories we personally hear everyday in our interactions with the community. 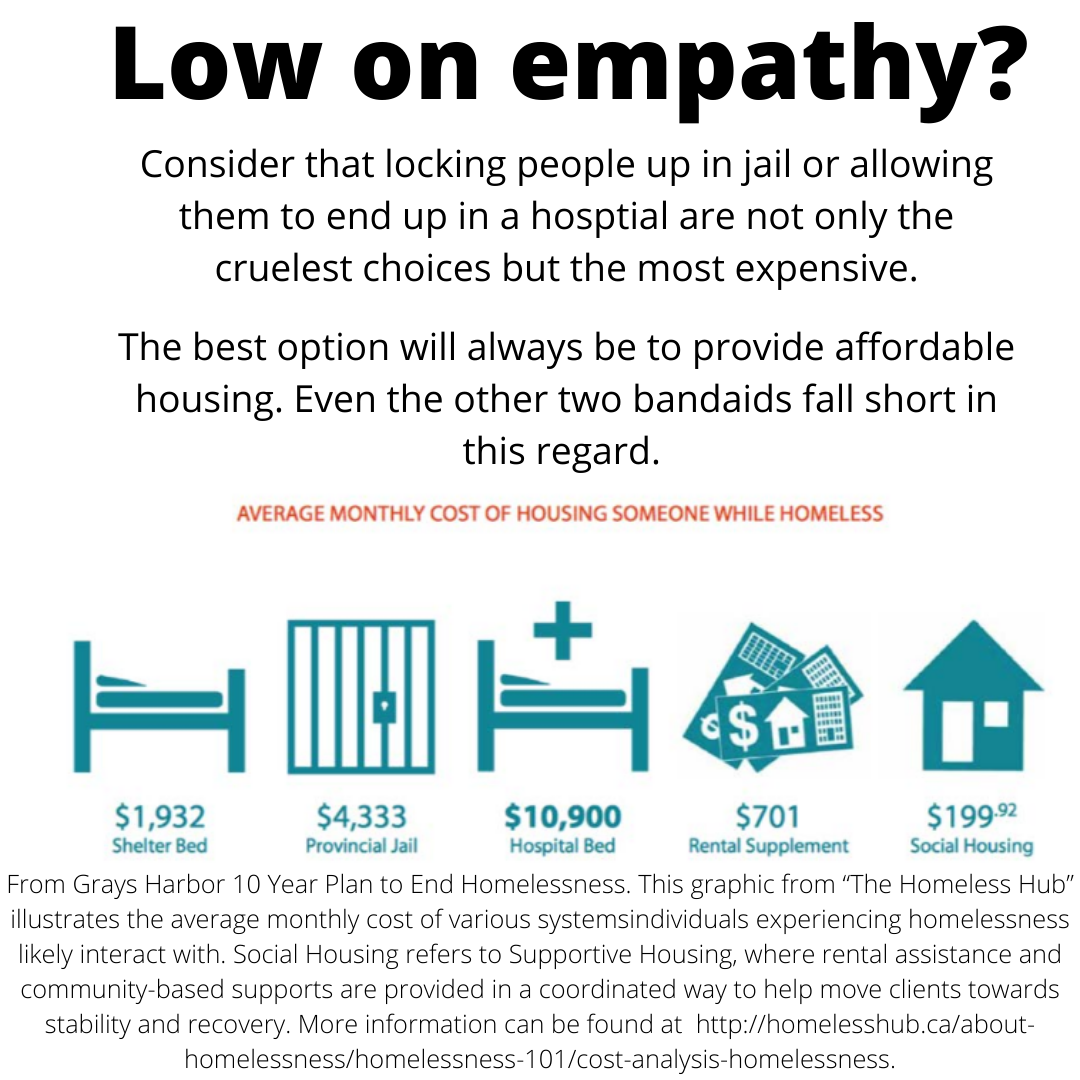 Then of course there are the proposed camps. Some, misunderstanding the issue, thought that the city was running some sort of shelter (instead of simply allowing a few people to sleep in tents in back of city hall) that just simply didn’t have enough rules attached. If we only vested our city government with some way to…let’s say compel – or force…some kind of labor from these highly vulnerable and already exploited people. Maybe just have it all wrapped in a nice little camp, a camp for working people…who have to work or are thrown out on the streets. A camp where people are forced to labor for existence…we can think of what to call it later I guess. Whatever you call it it certainly doesn’t sound like a novel idea. 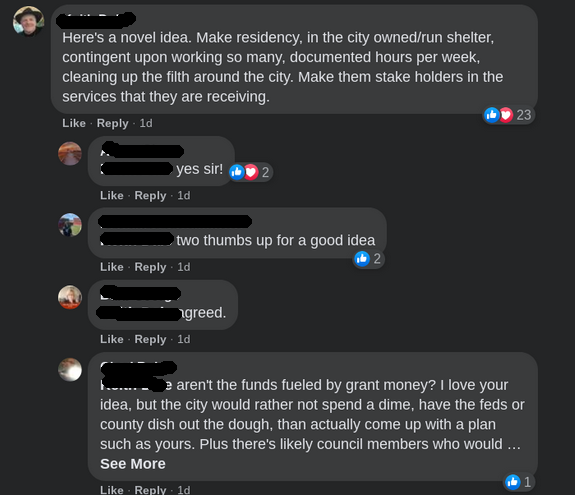 If you are wondering if anyone stepped up to defend the idea of forcing people to work have no fear. There was no shortage of tired out arguments and tropes from the past. As we all remember from history its not free labor if you house, feed, and “care” for the people you are exploiting. A project to extend the carceral state further into everyday life by criminalizing poverty and erecting prison camps for the poor and unhoused would be the next logical step in our continuing descent into this capitalist dystopian nightmare. 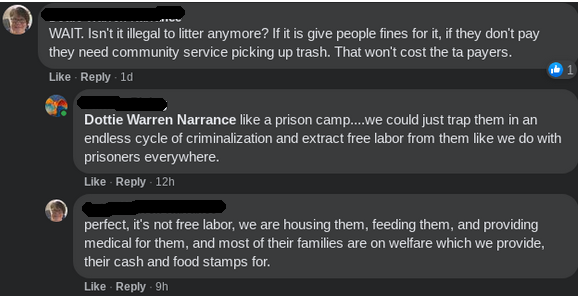 The issue here is not unhoused individuals, its not even garbage, the issue is the systems we live in that demand the lowest possible wages and the highest possible rents, all the the service of profit. It is clear that neither left wing or right wing politics are sufficient to solve any of the problems we are facing today. In fact they have been largely responsible for creating and perpetuating the systems that oppress us all. There is no doubt that the bureaucracy will grind on as it has for so long, leaving many in its wake. We do not need them. We here at Chehalis River Mutual Aid will be around countering toxic narratives, providing mutual aid for our community, and looking out for the most vulnerable among us. We are tired of the us/them created by such hostile right wing narratives and mean to labor directly and joyously with our friends and family in the streets to build a better world.