Local anti-homeless / anti-addict hate group “Save Our Aberdeen Please” was out on the streets on Sunday, March 14 for a photo op with local right wing politicians. They have couched their exploitative actions with the language of “cleaning up” “their” city. With many in the comments making comments alluding to who they might consider to be a part of “their” town. 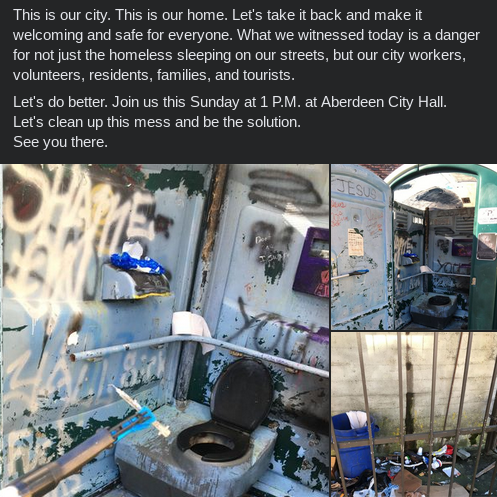 Here we can see the tried and true tactic of far right movements, the creation of an “in” group and an “out” group. This distinction seems to be simply user-defined, with each individual able to decide who is in and who is out of the community in question. The fact that people residing within the borders of this city might just be their neighbor, housed or not, seems to have been rejected by most here. This language is nothing new, but their tactics might be. Not that the right wing hasn’t demonized the poor and vulnerable for years, but the specific focus on trash pickups does seem to be making its way throughout the tapestry of right wing groups.

Why do they complain about the garbage but advocate for policies, like ending the safe needle exchange, that would contribute to more of what they rally against?

For generations people have supported and voted for politicians who continue to gut already sparse social services and public health measures. This has directly lead to the appalling material conditions faced by the most vulnerable and marginalized in our community. From the lack of health care, affordable housing, livable wages, social services, to public works efforts like trash clean up. Then, seemingly without any self awareness, these same people will turn around and demonize the very people they themselves have chosen to expose to the most pervasive form of state violence – systemic poverty. Now they want to act like heroes for a photo journal of the trash that the city refuses to pick up? 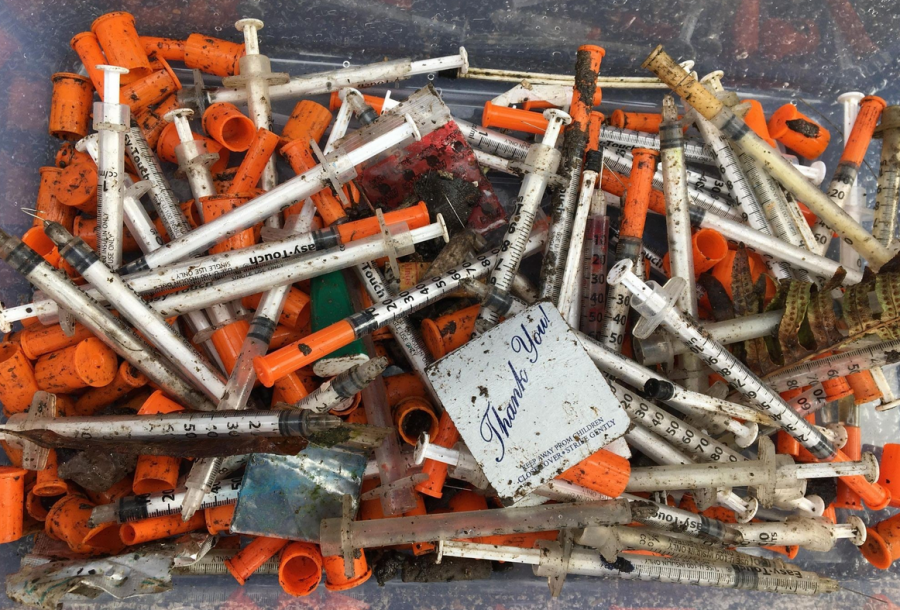 Well it was a great performance, and that’s all it was. They snapped a bunch of dramatic and shocking staged photos as they always do. This PR stunt was clearly meant to recruit people and get likes, rather than actually address any of the issues that lead to such conditions. Once again there will be harmful policies enacted, creating a situation they can again react to with outrage and use as fodder for more fear mongering.

Why do their posts always end up in calling for anti-homeless action if the concern is litter?

I think we can all agree that litter of any kind is not good. It can be unsafe for those coming into contact with it. It can get into very sensitive ecosystems that deserve our care. No one is advocating for more litter, and this is the point. All involved would appreciate the city doing its fucking job and cleaning up trash around town. But if your critique of the problems stop at the surface then we will never get into the roots of the problem and begin to address them. Garbage is not the problem here, the problem is that so many of our neighbors experience homelessness and addiction.

The garbage is supposed to be collected by the city we pay to clean this place. The city seems perfectly happy to let this relatively minor issue get so big it becomes the boogeyman the right needs in order to gather support for their anti-homeless crusade. A deliberate confusion of the problems, their causes, and their solutions are a part of the clever strategy being employed by this group. 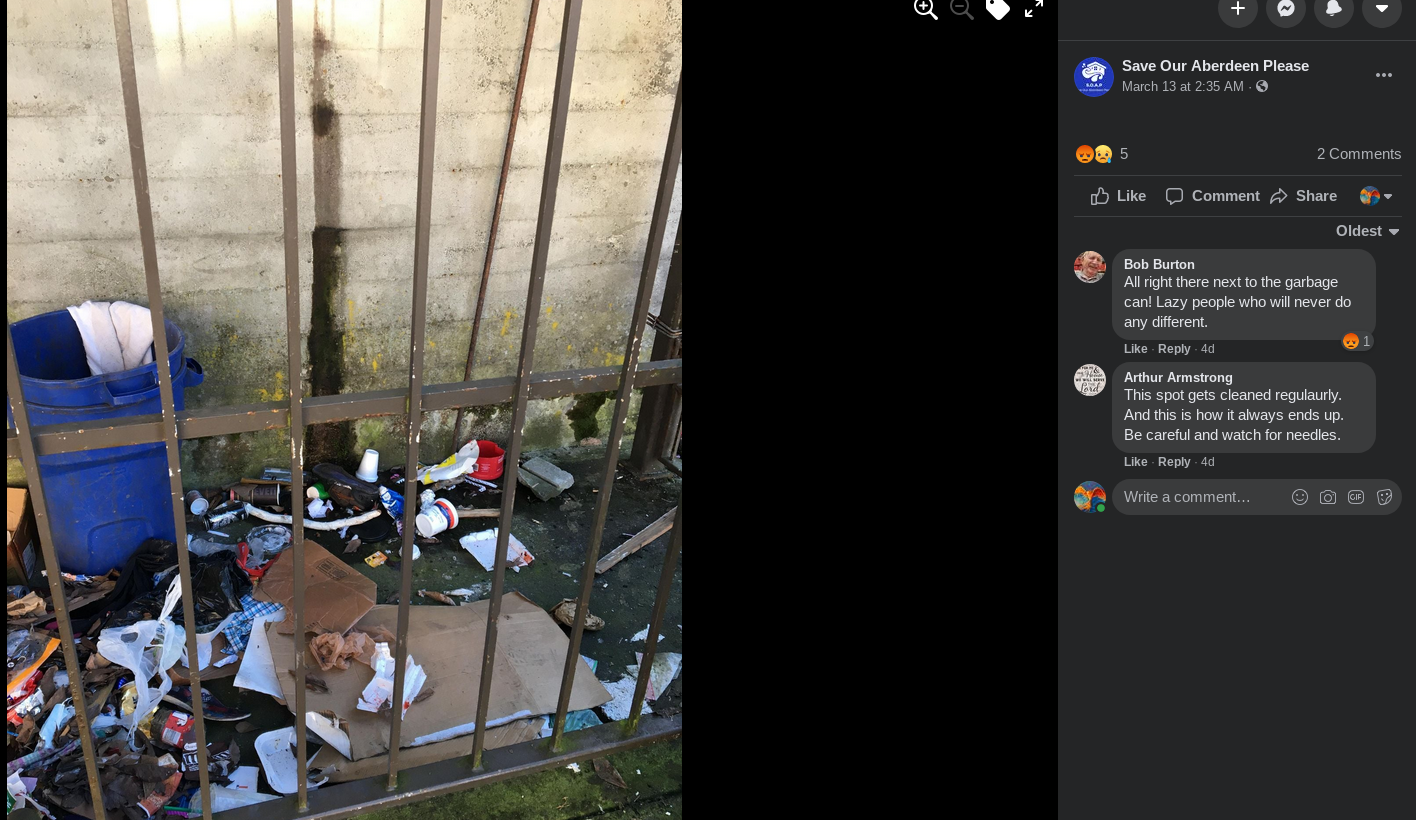 Both of these deceptive photos they took are of a locked and gated area behind Redivia. How would a homeless person get back there? The dumpster referred to as “right around the corner” has a lock on it as well. Something that is likely known to the shop owner of the adjacent tattoo parlor, seen making the comment. Not to mention even if there wasn’t a lock on it it would be illegal for them to use it, and these people would be complaining about people using their dumpster. 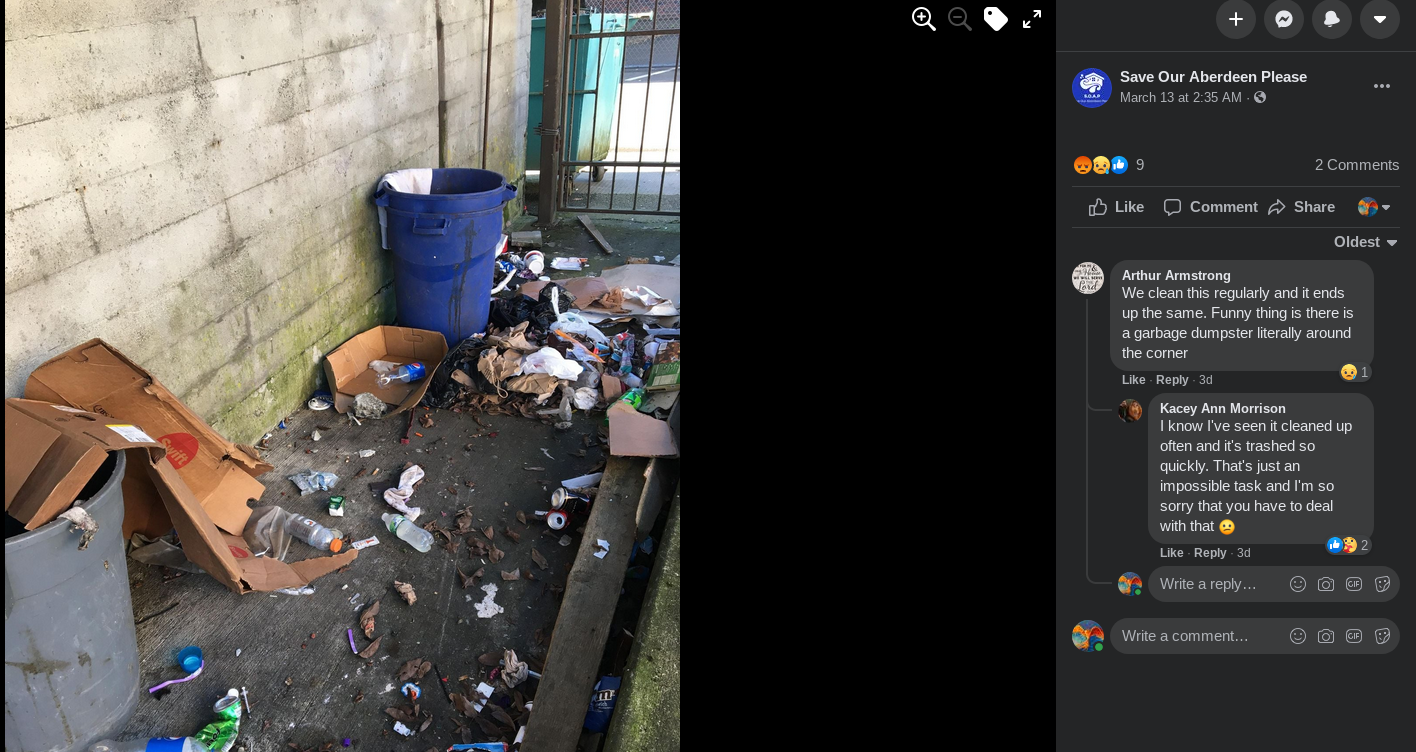 How does picking up trash solve the problems at hand?

Well that depends on how you define the problem. If the problem you see is too much trash, then perhaps picking it up yourself would make sense. It certainly wouldn’t hurt. But by looking below the surface you can see that there are deeper problems. The problem is in fact a lack of…, a lack of affordable housing, and a lack of jobs with livable wages. Tack onto that a lack of health care, and you can see clearly that the overarching problem is a lack of services from the systems in place to allegedly keep us safe.

This is a deep ceded problem with very complex and nuanced solutions, admittedly not as easy as simply picking up trash. What we need is an organized community and working class solidarity. That is, seeing the people around us who are out of work or out of doors as our friends and neighbors. “There but for sheer luck goes all of us”. If the system can treat them like this, what’s to stop it from crushing you and your family next under its ever expanding need for shareholder profits.

The problem goes beyond any individual; these are structural and systemic issues, the problem is that ANYONE should not have a comfortable and safe place to live and work. A look at the facts and figures from our report on the pretty non existent response to the recent cold snap shows that even if everyone in this county had an abundance of money the issue of a literal numerical lack of units of affordable housing remains. There is, in a real sense, no where for those experiencing homelessness to go. Money is the problem at every turn. Crucially though the problem isn’t merely a lack of funds, but a inequitable distribution of funds. There is always money for another prison or corporate bail out, or for economic development, but to keep people out of poverty? No, that’s not the goal. The goal is profits at the expense of life. We assert our right to exist, and to have what we need to live in safety.

So what aid is being offered by these blue shirts?

As evidenced by almost every aspect of modern life, the systems supposedly in place to serve and protect us are either miserable failures, or else that was never the intended purpose. In every disaster we can see clearly that the capacity of communities to mobilize to help each other outside of the confines of the state or non-profits. This mutual aid is always delivered more equitably, and efficiently than the slow to respond aid provided by institutions. Seeing a problem and taking direct action to fix it is wonderful, but when it is done in a reactionary way it can actually serve to do more harm than good. This group’s actions do little to combat even the surface level issue of trash, but nothing is to be done to ensure everyone has access to health care, housing, food, land, and all their various other needs. Enough with the bandaids, enough with the performative virtue signaling, enough with the insidious dehumanization. We need system change.

So then what might be the motives of this group?

While little effort is made to hide the cruelty of their comment sections, the actual drive behind actions like this can be hard to discern. For one, we have established the overall benign good that picking up trash has when divorced from any context. Our network has been planning similar clean up efforts, as well as providing resources to the community to help them better dispose of their own trash. The motives are clear when they align themselves with such politicians as Jim Walsh. 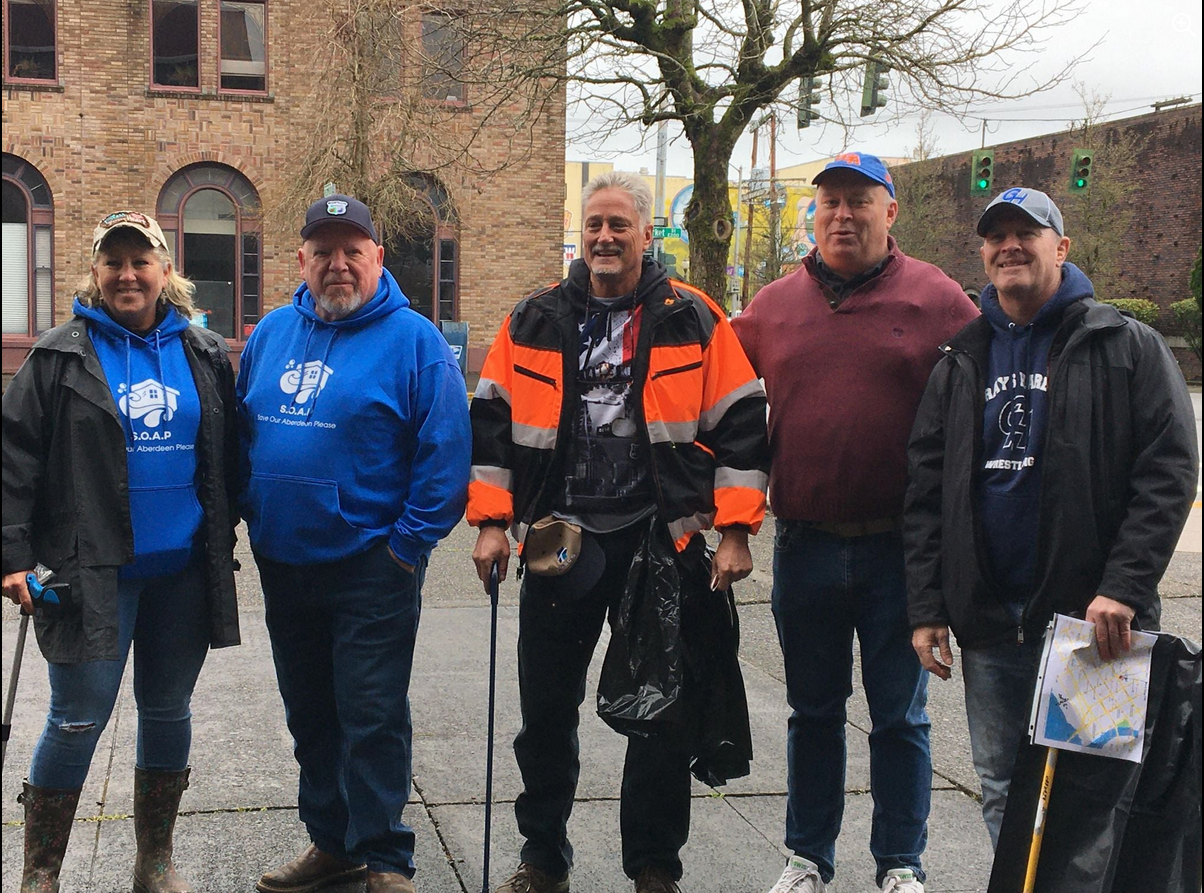 This article details the inconsistencies between national messaging and member actions that the far right milieu faces generally, and the paramilitary wing in particular. This movement has been tied to politicians such as Walsh, and the Republican Party more generally. By associating with such figures, many of whom (Walsh included) attended the white supremacist heavy “March for our Rights” rally in Olympia last June, they have added another reason to believe that their motives are not so benign. These people clearly have intentions in line with the politics of the far right. Argueing for forced labor, forced treatment, and further criminalization of addiction.

This group, and others like it, need to be watched closely. They have already helped enact truly harmful policies. With their unabashed hatred of the poor, and the folks they associate with, it seems like a matter of time until we start seeing acts of violence taken against our community.

We were able to warn the community of this the night before the event but unfortunately they are used to harassment from this group. We also tried to make sure they wouldn’t be allowed INSIDE tent city AGAIN to snap more cruel photos of people’s private property. Check out our previous report for more on that escapade.

Please be aware and stay safe out there. We would appreciate any eyes on this to let us know about any planned actions from hate groups such as this.

Thank you all. Solidarity forever.